Lake Tanganyika: Going Below the Surface 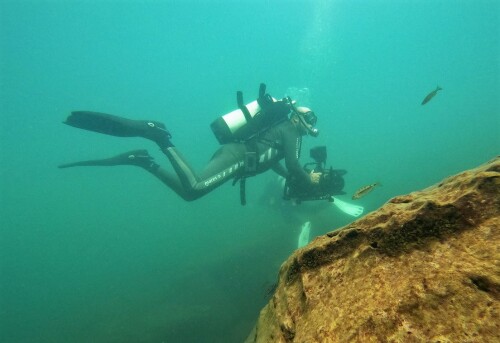 November 2021: Three weeks of filming with the Portuguese camera operator Nuno Sá, one of the world’s greatest underwater cameramen. His work featured in Cosmos Factory’s recent two-part documentary about Colombia. Since then, he has worked for the BBC, Disney and Netflix.

Another member of the team is the Swiss veteran Heinz Büscher, who knows the lake and its innumerable fish species better than most. Joining him is the Austrian professor of zoology and evolutionary biology Christian Sturmbauer, who lectures at the University of Graz’s zoology institute, and his colleague Lukas Zangl. The two Austrians have been researching Lake Tanganyika for twenty years. One of their specialist fields: the evolutionary genetics of the lake’s mouthbrooding Tropheus cichlids.

The production for the celebrated ORF UNIVERSUM documentary series, directed by Harald Pokieser, will wrap in spring of 2022. It will also air in two parts on ARTE, directed by Katalin Hanappi.